As part of the prayer for peace, Rev. Gerhard Reuther of the Evangelical Lutheran Church in Ruhla and the mayor of Ruhla, Hans-Joachim Ziegler, inaugurated the freshly set Luther Tree on Monday, March 26, 2018. He stands opposite the Peace Pole on the small square on Carl-Gareis-Strasse.

Ruhla once again joins a global community of people committed to peace, justice and the integrity of creation. In European history, special events or speeches have been associated with trees since early times. Also in the Bible, trees are often associated with special events. The tree of knowledge, the tree of life in the story of Adam and Eve, the olive branch as a sign of the love of God to Noah, Jesus Christ, who compares himself to a vine and died on a wooden cross. Trees also occupy a special position in the memory of the Reformation of Martin Luther. On several occasions, trees were planted in memory of Martin Luther or put into connection with his work and are still considered especially today. They have a long tradition in Germany, but today they are barely known. The initiators wanted to change that and introduce as many of these trees as possible through this project. Starting from an idea of ​​the painter and graphic artist Martin Hoffmann (Hamburg) and the environmental commissioner of the Evangelical church in central Germany, Dr. Hans-Joachim Döring, the theme of the Luther trees in the context of Reformation commemoration in 2017 was also taken up again under environmental and one-world aspects. 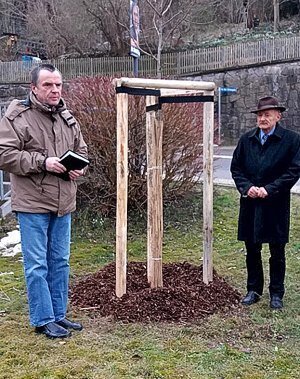 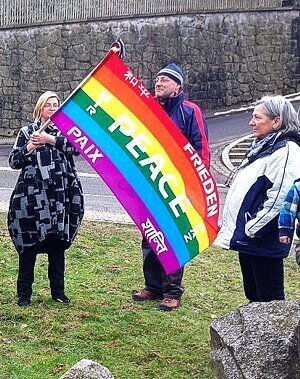 So-called Luther trees are not ordinary trees. Its designation is based on the person of the reformer Dr. Martin Luther (1483-1546), in whose memory they were planted. In Ruhla, the Luther Tree corresponds to the St. Concordia Church and the Ruhla Peace Pole, where we have been meeting monthly for four years now to pray for peace and justice for all people in the community of peace-loving people worldwide. With Martin Luther's Reformation realization that Jesus Christ is the supreme and last sign of God's love and grace for all human beings, it is expressed that he is the source of peace and reconciliation. Protecting and strengthening this peace is the task of all people. Our Peace Pole and our Luther tree should be symbols for this and encourage us to create a peaceful coexistence and to stand up for it.