Landgrave Ludwig, the grandson of Ludwig the Jumper, was kind and humble, gentle and good natured towards both nobility and lower classes in his youth.

For that reason he was not feared by his troops and consequently was conquered by many rebellious people who damaged the country and severely oppressed the people. His nobles considered him a fool, but his citizens and peasants cursed him and thought him evil - for the reason that for the sake of his kindness and patience, they became impoverished and ruined.

The nobles saw and knew very well that the complaining poor were let go before they reached him, but the princes used it secretly to their own advantage.

Well, it happened that the Landgrave went hunting one day, as he often did for his amusement, and became seperated from his fellows. Besides that, the darkness had drawn in.

After he had been wandering aimlessly through the forest for a long time, the fire of a forest smithy in the Ruhl shone brightly towards him. As he stood before the blacksmith, in grey robes and with his hunting bugle, he asked him for shelter. Loudly, the blacksmith asked him who he would be and he said, "The Landgrave' s huntsman".

To which the blacksmith replied, "No! No! The coward who reveals his name should wash his mouth out."

He continued to moan about him badly, but then he said, "I will gladly accomodate you, but not for his sake. Leave your horse in the shed, there you will find some grass. And you will have to help yourself this night as there is no bedding available here." 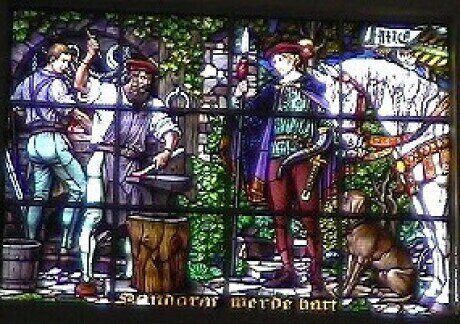 After that, the Landgrave did as he was told. But, during the night, the blacksmith in the Ruhl took care of greater and harder work, burned and heated the iron, and then struck it with the large hammer so that sparks flew.

So the blacksmith called everything how it is in the country and he damned the Landgrave to hell.

The Landgrave overheard everything the blacksmith said, slept very little during the night for thinking about it.

Now he became so strong in his courage, as beforehand he had been weak. In the early hours of the morning he rode away. He had learnt much from the blacksmith in this one night, and after that he ruled with a rod of iron.

When he had harnessed his rebellious vassals many times to the plough and badly humiliated them, they had to swear a great truce to him, and since then he became quite feared from them. They only had to hear his name called and they sighed. All their friends in Hesse and Thuringia were aggreived by him because he did not let them have their own way.

Whatever they could do to cause him trouble they did, and strove in various ways to bring him to his death. The Landgrave was frequently warned about this, and from then on he always went out prepared in his impressive iron armour, whenever he was amongst gentlemen and honourable people.

For that reason only they called him "the Iron Landgrave".

Which of them who were out to kill him, or whose friends or servants he caught by doing any atrocious deed, or learned the truth that they thought him harmful, he immediately left them to hang, or be strangled, or be drowned.

Thanks to Mr. Wolf (Pummpälzweg e.V.) who conceded the translation of the legend to me for publication.